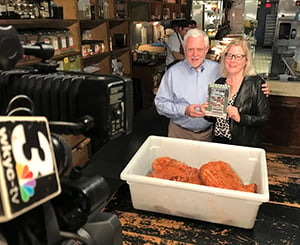 Ten years ago, husband and wife travel writers David Molyneaux and Fran Golden would have been hard-pressed to fill a book about Cleveland’s restaurant and foodie scene. Today that task was easy, and the result is a delicious and diverse guidebook called “Unique Eats and Eateries of Cleveland” (Reedy Press, $20.95).

“It’s fairly new that Cleveland has a thriving restaurant scene,” Fran says, rattling off some of the cuisines now available in the city – Guatemalan, Asian, Hawaiian and Caribbean. Along with the influx of immigrants who have brought their tastes and culinary talents to Cleveland, locals are eager to try new dishes and flavors too, the couple explains.

The book, published in May, is a “tasty tour” of eateries and food, from fancy dining and cafes to bakeries and markets, in all about 100 and only three located outside the city - Salt+ in Lakewood, and Tommy’s Restaurant and Nighttown in Cleveland Heights.

“The places kind of chose themselves. They had to have a story or be special or unique,” David says. Adds Fran, “We’re not restaurant critics, so we approached this as travel writers.”

David is a former Plain Dealer travel editor and Fran is a Boston travel writer who relocated to the area in 2012 to marry David. For a time, the couple lived in Oberlin, where David’s roots run deep – several ancestors are Oberlin College graduates and his great-grandfather and grandfather owned Watson’s Hardware located in the Molyneaux Building. The couple now lives in Shaker Heights.

David and Fran started with a list of about 150 places and foods, but the list kept changing over the year as they ate their way around Cleveland. (“There’s not a free meal in that book,” David adds.)

Looking for tasty vegan meals? Try TownHall in Ohio City or Pura Vida in downtown. “Cleveland is recognized as a top vegan city,” says Fran, who calls herself a “sometimes vegan.”

Want to impress out-of-town guests? For fancy French visit L’Albatros in University Circle (or enjoy happy hour on the patio with a glass of wine and its famous cheese plate), lunch and “the most amazing milkshakes” at Tommy’s and dim sum (especially on weekends) at Li Wah in Asia Town.

For sweets, the couple recommends Mitchell’s Ice Cream, now with nine locations in and around Cleveland and available at local grocery stores, and the year-old Larder Delicatessen and Bakery (when you see the photo of its Rhubarb Cream Cheese Rugelach you’ll know why).

“Larder is an example of a super talented young chef opening a restaurant. Jeremy Umansky is a food genius and his pastrami cured in koji (a fungus used in making soy sauce, sake and miso paste) is putting them on the map,” Fran says.

“There’s a lot of buzz here about food,” Fran says.

Meet the Authors and Learn More

If you are ready to explore new restaurants in the Cleveland area, be sure to pick up Fran and David’s new book. Did you know that trying new things such as different foods, learning a new hobby and exploring new places is good for your brain health?

Download our guide, “Keeping Your Brain Healthy As You Get Older,” to learn more about brain health and the 7 proactive steps to keep your mind sharp.