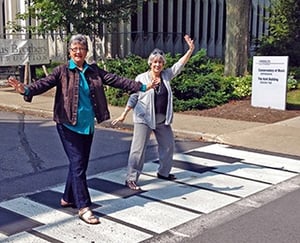 Like every chapter of their lives, Baby Boomers have redefined what it means to work and play, form relationships and find inner peace, and now grow old.

Even our language is undergoing a change as we talk about Boomers. For some Boomers, full retirement age is defined by Social Security as 65, for others 66 or 67. But many “retired” Boomers are or plan to continue working.

And then there’s AARP, which sends out its first (of hundreds) solicitations to people just before their 50th birthday.

Then there is the quandary of what to call aging Baby Boomers, the 76 million American men and women born between 1946 and 1964.

NPR’s Ina Jaffe covers the aging of America and addressed this dilemma in a 2014 article.  She sometimes uses "older adults" or "older Americans," if it's relevant to the story. "Sometimes I use the term 'senior' — though I've met some older people who don't like that, either. And 'senior citizen' really seems to annoy just about everyone now. ... There really aren't a lot of widely acceptable terms anymore," she says.

Other problematic terms include elderly, golden years, our seniors and silver tsunami.

"A tsunami is something that strikes without warning and that sucks everything out to sea — as [if] we're supposed to believe old people are going to suck all our resources out with them," says Ashton Applewhite, blogger and author of This Chair Rocks: A Manifesto Against Ageism. "In fact, the demographic wave that we're looking at is an extremely well-documented phenomenon that is washing gently across a flood plain. It's not crashing on some undefended shore without warning."

So now that we got that out of the way, let’s talk about how Baby Boomers are becoming older adults.

There are several reasons behind the numbers. People are living longer, the job market includes lots of tech and otherwise less physically demanding activities, and with increased life expectancy comes the need for more money.

And there’s the health benefits. According to Harvard Medical School:

“Some studies have linked working past retirement with better health and longevity. A 2016 study of about 3,000 people, published in the Journal of Epidemiology and Community Health, suggested that working even one more year beyond retirement age was associated with a 9 percent to 11 percent lower risk of dying during the 18-year study period, regardless of health.

A 2015 study of 83,000 older adults over 15 years, published in the CDC journal Preventing Chronic Disease, suggested that, compared with people who retired, people who worked past age 65 were about three times more likely to report being in good health and about half as likely to have serious health problems, such as cancer or heart disease.”

But a caveat - stressful or physically demanding jobs actually increase one’s risk for heart disease, injury and other health problems.

Life plan communities such as Kendal at Oberlin are planning for more future residents to be working by building and renovating cottages with versatile space. For instance, resident Tina Graf envisioned a workspace in her cottage and, with assistance from Kendal’s Facility Services,  a corner of her living room that overlooks a pond was converted into an office. “I have landed well,” she says.

Another resident converted an extra bedroom into a dance studio, so he can continue his part-time dance instructor business.

Lots of older adults are using and sharing their skills without compensation to help organizations and individuals in need. Where would our schools, food banks, churches, museums, parks and other non-profits be without older volunteers?

On average, Kendal residents and staff devote more than 60,000 hours annually to dozens of nonprofits in and around Lorain County. Since 2000, when Kendal began tracking hours, the value is equal to approximately $16 million.

Those numbers show no sign of slowing as Baby Boomers move in.

Yes, Boomers like to golf, but also bike and hike, swim, ski and practice yoga and tai chi. Physical activities are just part of their play.

Lifelong learning is increasingly popular, with many colleges and universities offering free audit classes to people over 60 or 65.  There are a plethora of classes available in person or virtual, many free or at a nominal cost.

The benefits of lifelong learning are numerous and include:

Many older adults combine their love of travel with learning by visiting exotic locales or engaging in other new adventures, both physical and mental.

Road Scholars are not ordinary travelers. They are lifelong learners typically over the age of 50 from diverse cultural and professional backgrounds. Students of the world, they are the guests you hope to sit next to at a dinner party. They've led interesting lives because they're interested in everything. And they are exactly the kind of people you want to be learning with as you explore the globe.

Passports are good for 10 years, and many Baby Boomers are on their fifth or sixth one, with no signs of stopping.

According to AARP 2018 Travel Trends

A Word about Baby Boomers’ Shadow Side

Researcher Harry R. Moody thought he had a great idea for a poster session at the Gerontological Society of America’s annual conference. But not one person stopped by to talk about “disillusionment, baby boomers and aging.”

So he wrote about it for the American Society on Aging.

His premise? Longevity comes with a price. Less money, declining physical and cognitive well-being, and loneliness is all real possibilities. Add to that the current global mood of disillusionment and well, gerontologists and baby boomers need to sit up.

“(Poet) Wendell Berry said, ‘We live the given life, and not the planned.’ Growing up, baby boomers had great expectations for the life they had planned. Even in the sixties, when some institutions failed them, there was an expectation that protest and activism could make the world better. All protest is based on hope, and sometimes that hope was fulfilled.

“But in the opening decades of the twenty-first century, we are witnessing, on a global scale, a mood of disillusionment that deserves deeper attention from gerontologists, because our historical period— the life we are given, not the life we have planned—coincides with a shift toward population aging. The aging of the baby boomers is a notable sign of this shift and members of this cohort, both individually and collectively, will face the challenge of how to convert their experience into a story that makes sense.”

5 Ways of Living Life with Purpose

Studies show that people who feel they live a purposeful life tend to be healthier in body, mind and spirit.

Learn More in Our Free Guide