Exercise Ideas to Relax the Mind 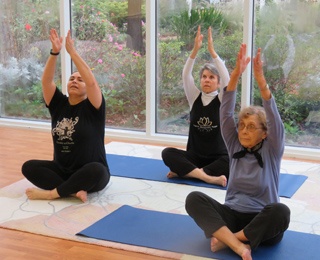 Those two words are familiar ones that most of us have said and heard countless times.

But just willing it to be so doesn’t necessarily do the trick. Relaxing can be hard work.

Yoga practitioner B.K.S. Iyengar spent a lifetime teaching yoga and spreading the word worldwide about its ability to cure illness and stress-related conditions. The India guru, who died in 2014 at the age of 95, said that savasana or corpse pose, which is a restful reclining pose, is one of the “most difficult” to master because of endless mind chatter.

Here are 4 methods to relax the mind:

Slowing down our breath and breathing mindfully can help us relax.

“Practicing regular, mindful breathing can be calming and energizing and can even help with stress-related health problems ranging from panic attacks to digestive disorders,” says Dr. Andrew Weil.

He recommends the simple 4-7-8 breathing exercise as a “natural tranquilizer for the nervous system.”

Yoga is a mind-body practice in which you combine controlled breathing with physical poses, or asanas. There are many different forms, styles and intensities of yoga. Its appeal to people of all ages and backgrounds continues to grow.

There’s a good reason many older adults are practicing yoga, according to AARP.

“Thirty-five years ago, cardiologist Dean Ornish, M.D., made headlines with his claim that yoga and meditation, when combined with improvements in diet and exercise habits, could reverse heart disease. Since then, research into the health benefits of yoga, especially its effect on adults 50-plus, has exploded,” Amy Paturel writes.

Some of the health benefits of practicing yoga include:

The Top 3 reasons people practice yoga are enjoyment of yoga, its impact on health and as a stress reliever.

“A number of studies have shown that yoga may help reduce stress and anxiety. It can also enhance your mood and overall sense of well-being,” according to the Mayo Clinic.

To begin a yoga practice, sign up for a beginner’s class at a health or community center or follow along with a DVD or YouTube video.  For deep relaxation, check out a restorative yoga class or video.  Restorative poses are gentle, supported by props and held for five minutes or longer.

Give Tai Chi a Try

A Chinese practice called tai chi involves a series of movements performed in a slow, focused manner and accompanied by deep breathing.

“Tai chi is low impact and puts minimal stress on muscles and joints, making it generally safe for all ages and fitness levels. In fact, because tai chi is a low impact exercise, it may be especially suitable if you're an older adult who otherwise may not exercise,” according to the Mayo Clinic.

Along with fighting stress, the gentle movements help strengthen muscles and improve flexibility and balance.

“A growing body of carefully conducted research is building a compelling case for tai chi as an adjunct to standard medical treatment for the prevention and rehabilitation of many conditions commonly associated with age," says Peter M. Wayne, assistant professor of medicine at Harvard Medical School and director of the Tai Chi and Mind-Body Research Program at Harvard Medical School's Osher Research Center.

Tai chi classes are also easy to find, along with online courses and DVD rentals. Water Tai Chi is also offered at some locations.

Add a Few Minutes of Meditation

Tai chi is often referred to as “meditation in motion.” But meditation without motion also offers many health benefits, including deeper sleep, increased calmness and reduced stress.

“Put most simply, meditation is a way to train the mind. Most of the time, our minds are wandering — we’re thinking about the future, dwelling on the past, worrying, fantasizing, fretting or daydreaming. Meditation brings us back to the present moment, and gives us the tools we need to be less stressed, calmer and kinder to ourselves and others,” writes New York Times reporter David Gelles.

Gelles has put together a basic “How to Meditate” guide that includes a variety of exercises, included guided meditation, walking meditation and mindful eating.

Gelles’ 6 steps for basic meditation (1 minute to 30 minutes in duration) are: