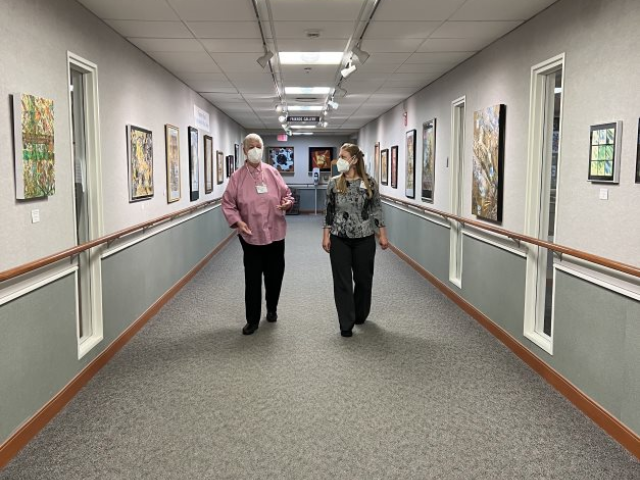 Kendal is home to more than 300 men and women in their 60s and well beyond. They come from near (Oberlin and Cleveland) and far (Hawaii, Canada and elsewhere). The residents share many common values, such as sustainability and lifelong learning, and many have ties to Oberlin College.

When Barb Davis was a hospice chaplain in nearby Avon she often visited patients who were living in nursing homes, including Kendal’s Stephens Care Center.

“I noticed the care they were getting at the care center. I came enough to see everyone at Kendal was getting this kind of care,” Barb says.

Now Barb is a Kendal resident and she is using her multiple skills to care for other residents.

“That is my calling”

Barb says her background is a “blessing” for volunteering at the Stephens Care Center. She was a college music major, a nurse, United Methodist chaplain and hospice chaplain and volunteer.

She visits the Stephens Care Center often, sometimes to just sit and talk with a resident or accompany someone to the dining room. Her visits include stops at the Jameson House, a memory support home for up to 12 residents.

“I do a lot of listening. What a privilege to listen to their stories,” she says.

On Saturdays she and pianist Betsy Baumbach lead interested residents in a hymn singalong and on Sunday afternoons she makes rounds to see who might be lonely or want a visit. She and other residents take turns sitting with a resident who is actively dying and often waiting for a family member to arrive.

“I have a heart for hospice. People ask me ‘how can you find joy?’ I can’t explain it in words, but I find peace and comfort walking with someone who is dying. It is an honor and a humbling experience,” says Barb, who is considering becoming a hospice volunteer again.

“Best decision I made”

Widowed and childless, Barb knew she wanted to live in a life plan community when she retired. “I needed to be where I could get the best care,” she says, so Kendal was at the top of her list.

During the pandemic she continued to help out at the care center, but with attention focused on sanitizing and resident safety.

Along with activities at the care center, Barb also enjoys all the musical offerings that are available, both on-site and at Oberlin College, and sharing meals with others.

A lumbar and knee sprain has introduced her to Kendal’s physical therapy department, which is “the best.”

In fact, she can’t say enough about the quality workforce throughout Kendal. “The entire staff – you couldn’t ask for a better group of people,” she says.

“I have it written on all my documents that I want hospice called in,” Barb says.

The National Hospice and Palliative Care Organization encourages everyone to create an advance directive, not just people who are seriously ill.

“If you are healthy you want to complete an advance directive so, if something suddenly happens and you can’t speak for yourself, others will know what you want in general terms. If nothing else, COVID has taught us that unexpected things happen,” NHPCO reports.