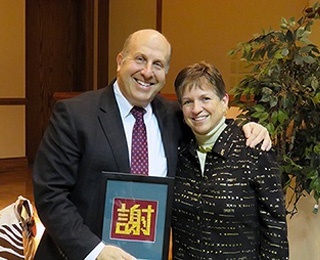 After a decade at the helm, Krislov is leaving his post at the liberal arts college this summer. It was recently announced that he has been named president of Pace University in New York City.

“I really mean it when I say I can’t imagine this community without Kendal. We are all enriched by it,” Krislov told the crowd, adding that the Kendal founders were “geniuses.”

Oberlin College and the 24-year-old Kendal community have forged many partnerships over the years. Almost 40 percent of residents have some affiliation with the college – alumni, former faculty or staff – and many of them remain involved in campus activities, including taking trips offered through the alumni association.

Oberlin College Is a Good Neighbor

All of Kendal’s residents benefit from having Oberlin College as a neighbor. The college is located just a mile away and a key reason it was named one of the “best small towns” to visit by Smithsonian Magazine.

Krislov highlighted several of the college’s opportunities for residents:

Also, community residents can sit in on a college class with permission of the professor and borrow books from any of the college’s four libraries.

Intergenerational relationships between Kendal residents and students are plentiful, thanks to both formal programs and informal gatherings, such as inviting students to dinner.

One of the oldest intergen programs is Ars Moriendi. Residents are paired with first-year college students enrolled in the “Ars Moriendi: Death and the Art of Dying” course. Students follow a hefty syllabus and attend class three times a week, but not residents. The student and resident meet informally for at least an hour weekly to talk, attend lectures, or share a meal.

“I’ve heard from students how that course has changed their lives,” Krislov said.

Krislov also talked about some of the achievements during his tenure, including Oberlin Illuminate, a campaign that raised nearly $318 million. Priorities include boosting financial aid (more than 80 percent of students receive need-based aid) and completing construction of the Bertram and Judith Kohl Building for jazz studies.

He ended his talk by commenting on the volatile times facing our country under the new administration. For institutions of higher education, administrators are concerned about ongoing funding for federal Pell Grants, which benefit low-income students, and travel restrictions for international faculty and students, he said.

In talking with friends and associates involved in labor, civil rights, immigration and income inequality, their concerns are broader, he said. “Young people, in particular, need to understand the importance of voting,” said Krislov, who taught advanced courses every semester at the college on aspects of law and public policy.

Will Krislov Return to Kendal?

Kendal CEO Barbara Thomas praised Krislov’s leadership at the college and in the community. “What is not to love about this man,” she said, handing him a framed weaving made by resident Mary Louise VanDyke. The weaving, made with red and yellow threads (the college’s colors), says “Thanks” in Chinese.

She also gave Krislov a priority application for Kendal. “When I settle down, Kendal is certainly a place I would consider,” the 56-year-old administrator said.

The college has formed a search committee for Krislov’s successor. Once a successor is named, Krislov said he will encourage the new president to visit Kendal early on, adding. “You are one of the great accomplishments in Oberlin.”