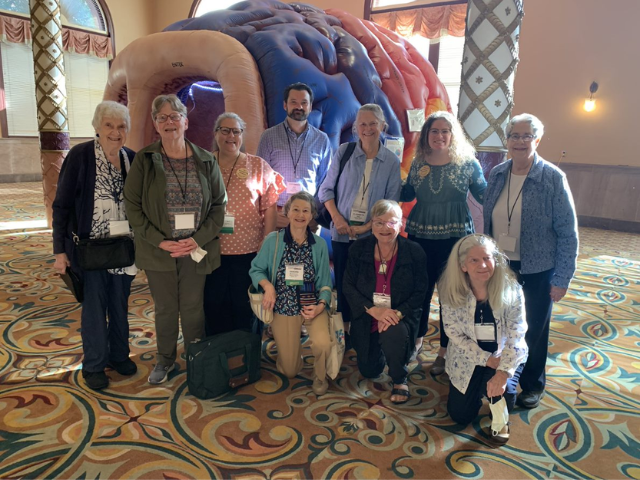 The theme of this year’s Dementia Action Alliance Conference was “living well with dementia” and the Kendal residents and staff who attended the Indianapolis conference saw countless examples of people doing just that.

From board members and presenters who introduced themselves as “being on the dementia journey” to attendees engaged in art and music therapy, the conference was an “affirming, warm and inclusive atmosphere,” Elizabeth Hole said

Part of the reason Elizabeth and the nine others went to the conference was to present Kendal’s “Stop, Look and Listen” workshop, a training program for residents and staff that was developed with the help of experts – residents who have dementia.

The other reason was to find best practices and bring them back to Kendal to share.

“Aha” moments and other experiences

During the 1 ½ hour presentation at Kendal in October, attendees took turns talking about their experiences.

Jesse Carlock’s sister has dementia and Jesse said she’s “made every mistake in the book.” Being at the conference helped Jesse to think less about losses and more on what people with dementia can do. “Losses are real, but we can focus way too much on deficiencies and miss capabilities and what can be developed,” she said.

For instance, at the conference there were lots of examples of non-verbal communication, including music, dance and movement, and the power of smiling. “If we walk past people with dementia without acknowledging them, they feel it,” Jesse said.

Sara Millman talked about the power of music. A film showed men and women bored and sitting with heads bowed. After putting on headphones and listening to their favorite music, the participants began smiling, singing and moving to the beat with “unambiguous joy.”

Ruth Ann Peel shared lessons learned from dementia-trained law enforcement that can be useful for others. The three “golden rules” are:

“I’m not a techy person,” said Carol Bojanowski, but after attending a tech program at the conference she is more comfortable with what tech can offer people with dementia, as well as older adults.

Examples of using smartphones, watches and speakers to help with memory loss include making lists and ordering groceries to med reminders and navigation tools. One man has programmed the Alexa sound system to remind him that his wife is not missing, but died several years ago. “And Alexa doesn’t get frustrated,” Carol said.

Michele was also moved by the power of sharing the Kendal experience with people at the conference. “I can’t tell you how proud I am to be a staff member in this community. We are an example of how we ‘transform the experience of aging.’ It’s not just a tagline, we do it,” she said.

Michele along with Elizabeth Hole, Sandi McClennen and Jesse Carlock presented the Stop, Look and Listen” workshop at the conference. The six others who attended the conference were residents Carol Bojanowski, Sara Millman, Ruth Ann Peel, Janet Newman and staff Janie Ellingsen and Ed Harder. 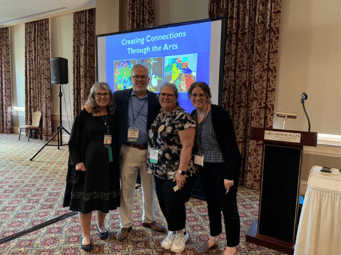 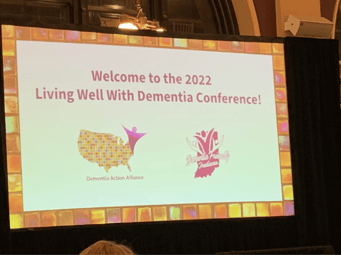 More to come for Kendal residents

The organizers will offer the one-hour training for residents and staff throughout the coming year. The Dementia Education Group, comprised of staff and residents, is always looking for new ways to educate the community, from films and books to support groups.

Sandi ended the Kendal presentation, saying “We want to hear from you, what education do you want. You guys are the experts of what you need, and we’ll work on those things.”