Oberlin Tours for Everyone 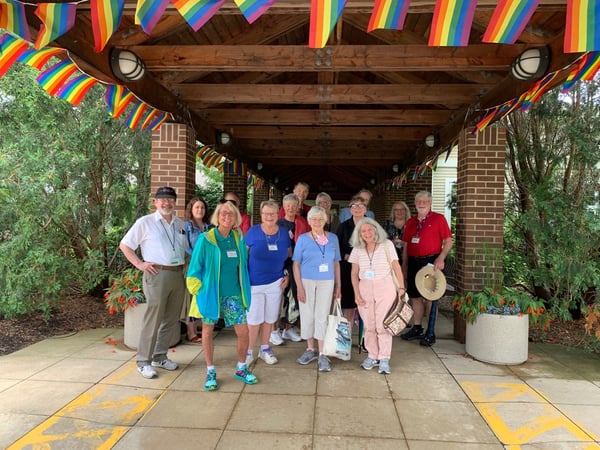 Sure, you know where Tappan Square is located, but do you know why the downtown square is name Tappan? (To honor New York City merchants, college supporters and abolitionists Arthur and Lewis Tappan.)

What about the Historic Elm that was removed in 1965 because of Dutch Elm Disease? (It’s historic because John Jay Shipherd and Philo Stewart were said to have knelt underneath it in 1833 and decided to begin the town of Oberlin.)

And those two large painted boulders that still stand? (Now public billboards, the first rock was removed from Plum Creek and placed on the square in 1897, the second in 1933 from Erie County.)

“I never knew that” is what Liz Schultz, executive director of the Oberlin Heritage Center, and her staff hear a lot from people, including locals, who take one of the many center tours.

The roots of the Oberlin Heritage Center date back to the Oberlin Village Improvement Society, founded in 1903 by a group of concerned citizens to beautify and improve the town, and the Oberlin Historical Society, organized in 1960 to preserve the 1836 Little Red Schoolhouse and the 1866 Monroe House. In 2005 the organization was given its present name and also includes a third building, the 1884 Jewett House.

An easy way to plug in and learn about Oberlin history is the center’s self-guided or digital tablet tours. Currently two tours are offered: Freedom Friends, which takes you to local landmarks connected to the city’s abolitionist history; and Picture the Past, which covers a one-

block radius extending from the corner of Main and College Streets and is filled with fun facts and historic photographs.

Themed History Walks are held throughout the summer. August features the 1-mile Oberlin Women’s History Walk. “Hear stories of powerful Oberlin women including Lucy Stone, Marianne Parker Dascomb, Adelia Field Johnston, Mary Church Terrell, and Lucy Stanton Day, and learn how they used John Shipherd’s promise (to elevate the female character through education) to shape what it meant to be a woman in Oberlin and in the United States.”

The Radicals and Reformers History Walk in Westwood Cemetery is scheduled for September.

Tours of the three historic buildings tours are held year-round and included two specialized ones – an historically inaccurate tour for myth busters and music in the home tour for musicians and non-musicians too.

Bring Your Own Bus Tour

You provide a busload of tour-goers and the center will provide a guide for an approximately one-hour tour of the city. (Cost is $100).

This tour is ideal for those new to Oberlin, which is why Kendal resident Kathy Hazelton decided to organize an outing for 16 Kendal residents and 2 staff members.

“My husband and I joined Kendal a few months before the pandemic hit and didn’t have time to explore Oberlin much before that.  As we were coming out of the restrictions, I thought about taking one of the tours offered by the Oberlin Heritage Center and I figured that the folks who joined during the pandemic would also like to learn about the town.   Another resident and I considered finding a long-term resident to take the group on a tour but then realized that OHC leads tours all the time,” Kathy explained.

The tour was a great introduction to their new hometown, Kathy said.

“We saw homes of important abolitionists and toured the cemetery where many of them are buried, along with college presidents and other important figures in the town’s history.  As we circled Tappan Square, Liz identified several styles of architecture and the architects who designed them.”

All who attended were enthusiastic about the tour, she said.  Since there was time only for highlights of the town and college, several said they plan to take other tours on more focused topics offered by the Heritage Center.

Kelly Corcoran, Kendal’s new Marketing Manager, is a Chicago native and knew little about the city before the tour. “This was the perfect way to see and learn about Oberlin. Liz managed to share a lot in just under two hours and even had a few restaurant suggestions for Oberlin newbies like myself,” Kelly said.

The bus tour is just one small example of the strong connection between the two nonprofit organizations, the latest being Liz Schultz’s membership on Kendal’s Board of Directors. Liz joined the board this year and is chairing the Strategic Planning Committee, which plans to begin sharing its summary with Kendal residents this summer.

Over the years Kendal residents have volunteered at the center, helping with mailings, programming and specialized tours.

When you decide to live in Oberlin, Ohio you have decided to live wisely! Find out everything this town has to offer in our free guide. 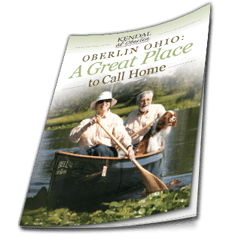