The Artists of Kendal Creates: 2021 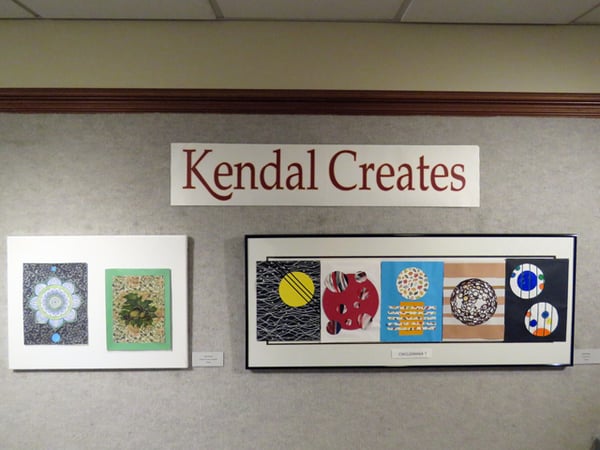 Kendal is home to many creative people and every two years, their artwork is front and center. This year’s “Kendal Creates” exhibit features more than 50 residents and 80 pieces of artwork, from paintings and photography to quilts and ceramics.

Although this year’s exhibit is closed to the general public, we want to bring a sampling of the artwork to you. Meet seven of our artist residents. 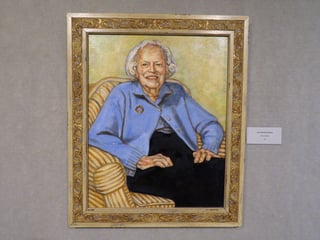 Ellen Adams from Massachusetts is one of the founders of Kendal at Oberlin and is Jack’s cousin.

“It was her repeated invitations to visit here which put the idea in my head to move to Oberlin myself.  Many people still here knew her, so I thought this painting would be a compelling piece to submit to Kendal Create,” Jack says.

Jack, a professional portrait painter since he was 17, moved to Kendal a year and a half ago. “My cottage porch makes an excellent studio.  There are a great many artists and artistic spirits at Kendal at Oberlin.  The community feels most supportive.  I have heard several residents call this an ‘Artist Colony’ after viewing the current show,” he says.

Michi calls herself an art appreciator. “I come from Japan where art of ceramics had a long tradition,” she says.

She is particularly attached to her piece in the exhibit. “I was not anticipating making it, if the teacher did not ask what animal I wanted to make. For the life of me I had no idea what made me say elephant. Then she asked, what kind?” Michi says.

At Kendal, Michi has explored other creative forms and is now writing poetry.

“I have no artistic background but do have a life-long interest in railroads and trains and am probably a frustrated engineer, so became interested in model railroading in HO scale,” says Bud, who is a member of the New York Central System Historical Society.

The station he modeled is unusual because it has an operator’s bay on both sides.

“Living at Kendal provides some leisure to indulge my hobby, the woodshop is available, and the surrounding area has people with a shared interest,” he says.

A professional musician, Carol turned to photography because of her interest in nature and writing haikus.

“The two waterfowl photographs have subjects that complement each other. Next to the stunningly colorful Wood Drake in a traditional pose is an unusual view of the almost monochromatic Canada Goose, whose feathers form an engaging arrangement of sizes, shapes and textures,” she explains.

Before moving to Kendal, she would make the two-hour round trip drive from her home to see the biennial Kendal Creates. (The show alternates with Kendal Collects).

“The creativity of Kendal at Oberlin residents is a key reason why I moved here: three art galleries and the multimedia literary magazine Eureka! provide inspiration,” she says.

Pauline has done needle work most of her life, including crewel embroidery, sewing and quilting.

“I don’t consider myself a quilter, but I had a large collection of my mother’s handkerchiefs and wanting to remember her in a physical way I thought of the handkerchief quilt. I enjoyed working on it and wondering how my mother would have enjoyed it,” she says. 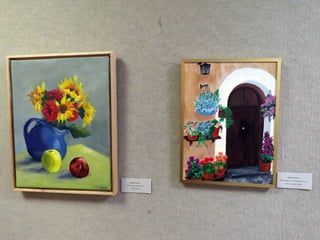 Sharon has been painting and drawing since childhood.

“I started the still life some years ago in a class in Annapolis. I didn’t have time to finish it then, as I got immersed in preparing to move to Kendal. I brought the unfinished painting with me and was inspired by the announcement that Kendal Creates would be held again this year and got the painting and my oil supplies out of storage to finish it this spring. The other painting was inspired by my travels in Italy and the abundant charm of the neighborhoods in Tuscany,” she says. 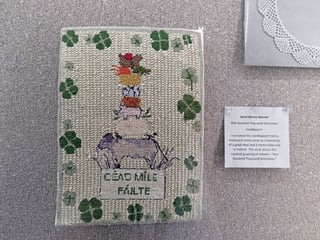 Janet has always enjoyed needlepoint, especially making up her own design patterns.

“I chose the piece I am exhibiting because I thought Kendal people could relate to it.  I created the needlepoint from a restaurant menu on my visit to Ireland as a memento of a good meal and a memorable trip. The redesigned border is of four-leaf clovers and the restaurant name place is redesigned to become the national greeting of Ireland ‘One Hundred Thousand Welcomes,’ she says adding, “The needlepoint was awarded a ribbon at the Ohio Living Exhibit.”

At Kendal, she says she has many opportunities to explore art. She is currently in a Sunday Stitchers group that meets twice a month for stitching and socializing and is already working on a piece for Kendal Creates 2023 – a needlepoint footstool cover for a grandchild.