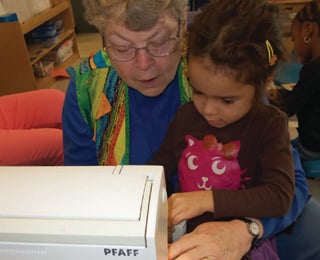 When Polly and Al Carroll moved to Kendal at Oberlin in 2003, they were excited to meet new people, especially those who shared their interest in foreign countries and diverse cultures.

Ten years later when Arlene and Larry Dunn moved to the retirement community, they sought out musicians, composers and others who appreciated music.

The result? Both couples now have friendships and informal relationships with people of all ages, including college-aged students and young adults.

“It keeps me feeling young,” Arlene says about the intergenerational relationships in her life.

Larry adds, “It gives me hope for the future. There are a lot of spirited young people here who won’t let turbulent times quash their dreams about making a difference in the world.”

For children and young adults, academics and social skills improve and negative behaviors, such as drug and alcohol abuse, decrease when they are involved in mentoring and other intergenerational relationships.

“Intergenerational programs bring together diverse groups and networks and help to dispel inaccurate and negative stereotypes. Sharing talents and resources help to create a unified group identity. Children, youth, and older adults are less alienated while the community recognizes that they can be contributing members of society. These programs also help preserve historical and cultural traditions, enhance community spirit and strengthen partnerships among community organizations and individuals,” according to Generations United.

Kendal has many formal and informal mentoring programs and other activities with Oberlin City Schools and Oberlin College.  Kendal is also home to an Early Learning Center.

Every Monday, Polly Carroll volunteers at the center, helping teachers and playing with the pre-schoolers.

This fall, she and Al will be paired with a first-year student at Oberlin College who is enrolled in the “Ars Moriendi: Death and the Art of Dying” course. Students follow a hefty syllabus and attend class three times a week, but not residents. The student and resident meet informally for at least an hour weekly to talk, attend lectures, share a meal.

“It’s not about academics, it’s about relationships,” Michele Tarsitano-Amato, Director of Creative Arts Therapy, tells residents. “How have you lived your life and what would you say to someone younger of what not to miss?”

The Carrolls’ main focus is interacting with international students on the college campus. The couple lived in England for 2 ½ years and appreciated all the hospitality Brits extended to them, and they want to do the same for students far from home. Plus they worked with international families and scientists at Brookhaven National Laboratory before coming to Kendal, which also fueled their interest.

And, of course, food is often involved. Polly likes to cook meals, especially a Chinese, Thai or other dish from a student’s native country, or they all eat together at the Kendal dining room or in a restaurant.  “Students are always hungry,” Polly says.

The interest in having an intergenerational relationship goes both ways, Polly has found. “The students love having connections with older people,” she says. Both parties learn about each other’s cultures, everything from food and having fun to religion and politics.

“I feel like we’ve gotten to be a smaller and smaller world, and this is a way to build bridges to other cultures,” she says.

Arlene and Larry Dunn recently spent a day planting fruit trees at the Oberlin Legion Field Community Garden, where volunteers of all ages are working hard to feed residents in need with homegrown vegetables. The John Bartram Arboretum at Kendal donated the trees to assist in the effort.

“It was inspiring,” Arlene says. “What you learn is that you can make things happen.”

Larry is on the board of the Northern Ohio Youth Orchestra, which offers a myriad of performance and learning opportunities for youth, fourth grade through high school.

The couple has made many lasting friendships with students from the college’s Conservatory of Music. They have shared meals, museums, movies and like outings with other college students, too, including those who have participated in Arboretum activities through the Environmental Studies community service project, and in the Ars Moriendi class.

Larry and Arlene have also met students while they were auditing classes at the college. “A professor told us that students really appreciate having older adults in the class for their experience and perspective,” Larry says.

He added, “One former student we know said the best friend she made in her time in Oberlin was a Kendal resident who audited her first-year philosophy class.”