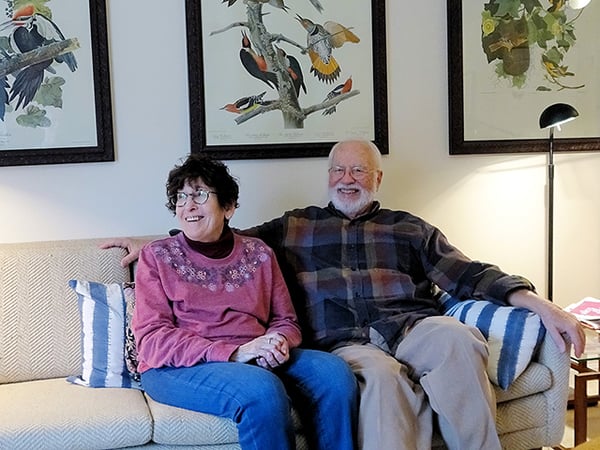 Larry and Betsy Mirel planned to “age in place” in their D.C. home, but a windstorm uprooted those plans. After the Mirels spent lots of time and money clearing up a fallen hemlock tree (in a yard lined with other trees), the couple decided to age at a Life Plan Community.

They visited Kendal in May 2018 and by Thanksgiving had moved in.

“It was love at first sight,” Betsy says. Adds Larry, “We couldn’t find anything we didn’t like.”

Unlike most people who spend a couple years or more on the Priority List before deciding to move to Kendal, the Mirels were fast trackers. Plus, they were moving out of a 2,500-square-foot house that had been their home for more than 50 years into a 917-square-foot apartment 300 miles away.

“We downsized using the ‘dead mouse’ approach. No you haven’t heard of it because I made it up. When you catch a mouse in a trap you close your eyes and put it in a bag. We did that with a lot of stuff,” Betsy says.

Their approach worked: Everything fit in their new home except one cabinet, which was hauled over to Kendal’s Resale Shop.

“Now almost two years later there’s only a couple things I wish I had not gotten rid of,” she says.

Adjusting to Community Living Was a Breeze

Larry attended Oberlin College (class of ‘57) and played clarinet in the Oberlin Orchestra. He continued to play chamber music as he pursued a law career. Once settled at Kendal he started attending orchestra rehearsals and soon met the conductor and clarinet professor, which led to more musical outings.

Plus, Larry hooked up with musicians living at Kendal for jam seasons and informal concerts.

In addition, the couple attended as many college concerts as they could – sometimes six a week.

Betsy’s focus turned to Kendal’s on-site Early Learning Center. She had spent most of her career teaching children pre-K to first grade and liked ELC’s style, discipline and teaching focus. She volunteered two mornings a week, often bringing “messy” projects and experiments for the preschoolers.

In addition, she spent one morning a week volunteering with first graders at Oberlin’s Eastwood Elementary School.

These activities are on hiatus because of the pandemic, but their new friendships continue to grow. “People here are very open and friendly. They are more interesting as you get to know them,” Larry says. Adds Betsy, “I really like the people at Kendal. I feel socially much richer and happier here.”

They also have found it easy to adjust to a new physical space.

“We look out on Button Bush Woods and barely see other cottages. It feels somewhat similar to the view we had of Rock Creek Park across the street from our house in D.C.,” Betsy says.

The couple was able to break up the monotony of “sheltering in place” by spending a month this summer in their beach house on Martha’s Vineyard. Now they’re starting to add new activities to their calendars.

“Betsy is auditing an Oberlin College course via Zoom entitled “Plague Narratives” and Larry has signed up with Tiffany Chang, the conductor of the Oberlin Arts and Sciences Orchestra, to participate in some remote ensemble playing and lectures with college musicians. Larry and other Kendal musicians have been meeting outside in Kendal parking lots to play chamber music. Betsy and Larry are both attending a strength and balance class taught outside by the fitness center staff.

“People are being very creative at Kendal,” Larry says.

Adds Betsy, “In the beginning of the pandemic there was a sense of loss. Our whole routine had turned into confetti. But I can’t think of any better place to be than Kendal.”

Plan a Virtual Visit to Kendal at Oberlin 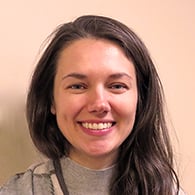 Looking for a vibrant retirement living community that fits your future living plans? Schedule a "Walk and Talk" virtual tour with Elisabeth today.