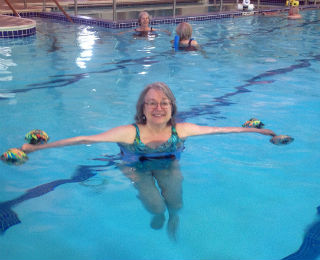 While planning and waiting times vary considerably among prospective residents, the Oberlin couple signed up 10 years ago. Their move-in date is this year.

“Being on the Priority List offers excellent benefits. And both of us love Oberlin and didn’t want to leave, and so early on, we thought Kendal was a very good idea,” Mary says.

“This is the first step in the admissions process and is recommended for anyone giving serious consideration to entering our community,” explains Terry Kovach, assistant marketing director.

Joining the Priority List is easy and obligation-free. A person fills out a 2-page informational application, accompanied by a $1,000 deposit and a $200 processing fee ($300 for a couple). The deposit can be refunded at any time or will be applied to the entry fee upon admission.

Two questions are asked on the application to help the marketing staff plan for prospective residents: What is the approximate year you might want to move to Kendal and what type of residence(s) interest you. Kendal homes range from studio apartments to 2-bedroom plus den cottages, in all about 225 residences on the campus.

The Priority List began several years before Kendal opened in 1993 and continues to be a good planning tool for prospective residents. “It’s a wonderful way to get to know Kendal,” Terry says.

The Van Nortwicks’ Road to Kendal

The couple has lived in Oberlin since 1965. Both are retired professors – Thomas was an Oberlin College professor of classics and Mary a professor of English and director of Canadian Studies at the University of Akron.

About the time they joined the Priority List, Mary began caring for her mother, who had a stroke and was living in Canada. As her mother’s health declined, multiple moves were required.

“That experience certainly confirmed for me how good the Kendal model is,” she says.

Kendal is a life plan community, offering independent living, assisted living and skilled nursing. The Jameson House, currently under construction and slated to open in mid-2017, will offer a supportive environment for residents living with cognitive impairment.

In 2011, both Mary and Thomas faced their own health issues. After back surgery, Mary turned to the Kendal pool for deep water walking.

“The half-price membership was a cost saver,” says Mary, who continues to use the pool 5 times a week. In addition to the health benefits, the pool has been a great way to nurture old friendships and make new friends, she adds.

After recovering from their illnesses, the couple decided it was time to get serious about moving to Kendal, and they applied for the Waiting/Ready List.

Once the forms are completed, an on-site admissions interview is scheduled. The interview is an opportunity for applicants to ask questions of staff and learn about Kendal in greater detail.

The Kendal Admissions Committee then reviews the application to see if all the requirements are met. Once approved, people are placed on the Waiting/Ready List and are contacted when desired housing becomes available.

“The more specific you are in terms of features, the longer you can expect to be on the list,” Terry says.

For instance, a resident may want a home with a particular view or a location close to the community center or to water features.

The Van Nortwicks turned down a few available residences before finding their ideal cottage in June.

But the time was well spent, Mary says.

The couple has eaten many meals at the dining room with old and new friends. Thomas has joined the weekly luncheon of retired Oberlin College professors.

They have attended the Silent Auction, Spring Fling and other events. In fact, Mary gave a lecture on the Canadian health care system and taught 3 courses on Canadian writers at Kendal.

They read the Kendalight closely, learning about campus activities and resident interests. Mary especially enjoys the articles about new residents and the Kendal Kryptogram, a puzzle designed by resident Nina Love.

“I’m not moving to a strange place at all,” Mary says.

Marketing’s Terry Kovach agrees. “You are making social ties before you actually move here and are getting to know the community.”

Mary and Thomas have read all about downsizing, including many of the articles published by Kendal, and now, they are knee-deep in the process.

They are moving from a 10-room house to a 2-bedroom cottage and already have places lined up for donations – Habitat for Humanity ReStore and Kendal’s Resale Shop.

“I’ve been donating to the Resale Shop for years,” she says.

Their move-in date is early September.

For the Van Nortwicks, who live in Oberlin and could easily take advantage of all the Priority List benefits, taking the first step a decade ago and then waiting until their ideal cottage was available, worked for them. Others spend much less time making the move.

Every resident’s road to Kendal varies in terms of duration, but joining the Priority List is the best way to start for everyone.

“You really look at Kendal in a different way once you join the Priority List,” Mary says. “You start to think what it would feel like to live there, and your friends at Kendal start selling it to you.”

Some men and women interested in joining Kendal may be reluctant to apply for the Priority List because they are uncertain if they can afford to live there.

“Our financial requirement for residency asks that people have enough income and assets to cover the cost of living at Kendal through their actuarial life expectancy. Unfortunately, there is no easy formula that tells us how much that is. There are many variables that have to be considered: size of accommodation, single or double occupancy, long-term care insurance (if applicable), and more.

“To help you work through this, Kendal at Oberlin offers the option of a confidential Preliminary Financial Analysis. We would ask you to tell us what size accommodation you are considering, when you might move, and then provide some information about your income and assets. From there, we can calculate a year-by-year projection of financial status if you were living at Kendal. The projection includes conservative estimates of asset growth, as well as inflation factors on expenses.

“Of course this is just one possible scenario and a conservative one as well. It is meant solely as a preliminary estimate of affordability and is not a guarantee of what your expenses at Kendal will be.”

For people who live out of town, the Try It, You’ll Like It program is an ideal way to get a feel for what living at Kendal is all about before joining the Priority List. You stay overnight in a model cottage or apartment, take tours, attend events, meet informally with residents and staff, and get to know Oberlin and the surrounding area.