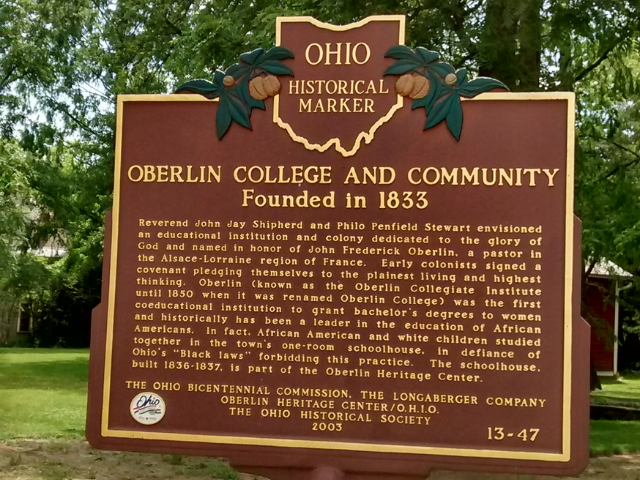 An historical marker at 73 ½ Professor Street in Oberlin describing the 1833 founding of Oberlin College and the surrounding community sets the stage:The statement includes such phrases as:

This nearly two-century tradition of supporting diversity continues today in the city and college, and, since 1993, at Kendal at Oberlin.

Visitors who want to learn more about the city and college’s rich history of diversity make their first stop at the Oberlin Heritage Center, where the historical marker mentioned above is located.

The center offers tours and history walks, both guided and self-guided. One of its most popular self-guided tours is “Oberlin Origins” described as such: “Hear about the events and individuals that shaped Oberlin’s first one hundred years, including stories of those who lived in the Monroe House. Topics include Oberlin's beginnings as a Christian Perfectionist community, coeducation, and abolition.”

Throughout the year the center offers special tours, such as a self-guided tour highlighting African American Civil War soldiers memorialized in the city’s Westwood Cemetery during Black History Month in February and women’s rights during Women’s History Month in March. The center also has a museum store, with several books for sale about Oberlin.

Speaking of Black and women’s rights

“I am excited to be a part of this journey with the Oberlin community and know that we will be, I believe, the institution that’s providing solutions to how we match this commitment to liberal arts, social justice and selectivity but also sustainability,” Ambar said in an interview published in Diverse: Issues in Higher Education when she joined Oberlin College in 2017.

Highlights of women’s rights in Oberlin include:

The first four women in the United States to earn a bachelor’s degree were Oberlin College students (known as the “Oberlin Four”);

Many Oberlin women went into missionary work and were killed in the Boxer Uprising in China or died from disease;

Oberlin’s commitment to civil rights is lengthy too.

Between 1830 and 1860 about 50,000 slaves escaped through the Underground Railroad. Oberlin was Station 99 in this secret escape system.

Fast forward 100 years to the Civil Rights movement. The Rev. Dr. Martin Luther King, Jr. gave several speeches in Oberlin, including the 1965 Commencement address. He urged continued commitment to justice given that they were graduates of a college that “has probably done more than any other [college] to support the struggle for racial justice."

In 2015, First Lady Michelle Obama spoke at the commencement, again drawing attention to Oberlin’s deep roots fighting for equal rights for all.

‘The founders of this school didn’t just decide to admit women and African American students and then pat themselves on the back and say 'job well done.' No, even in those early days, folks here at Oberlin were attending anti-slavery meetings, shivering on rough wooden benches in unheated, unfinished buildings. They were joining the Equal Suffrage League and speaking out for women’s right to vote.  They were leading civil rights marches and sit-ins, organizing exchange programs with historically black colleges and universities, and so much more,” she said.

Every June hundreds of men, women and children gather in the square for Oberlin’s Annual Juneteenth Festival to celebrate the countless contributions of local African-Americans past and current.

Gay rights is celebrated on campus and off. Two years after the famous 1969 Stonewall riots in New York City, the Oberlin Gay Liberation was approved as a student organization.

Diversity at Kendal at Oberlin

This spirit of inclusion and support for gay rights is alive and thriving at Kendal. In 2018, as part of LGBT Pride Month, eight residents shared their personal stories during a panel discussion attended by several hundred people.

“Here at Kendal, we feel safe.  More than safe—belonging to a community where the stated policy of inclusion and the Kendal values are more than words but run true in the life of this beloved community,” said Ardith Hayes, who moved to Kendal with her wife in 2011.

After the discussion, residents announced the formation of a new group - LGBTA+ (Lesbian Gay Bisexual Transgender Allies Plus), an awareness, advocacy and support group for lesbian, gay, bisexual, transgender and other gender non-conforming residents, staff and allies at Kendal at Oberlin.

Also new at Kendal is its Oberlin Racial Equity Forum, a series of lectures, presentations, and workshops that aim to examine the role of race in U.S. society, culture, and government through both historical and contemporary lenses. The objective of this series is to develop an understanding of the systemic nature of racism with the goal of finding concrete ways to combat it and establish a more equitable society.

The forum’s first presentation is this month. A.G. Miller, Professor Emeritus of Religion, Oberlin College, will discuss his search for his ancestors and the history of their battle for freedom and dignity in the Civil War and Reconstruction Era.