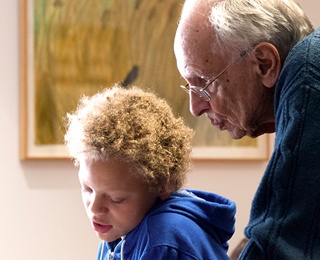 Ask a roomful of people to describe today’s young adults and you’re apt to hear words like impatient, entitled, self-centered and fun-focused. Turns out, that’s also how the younger generation (the Boomers of today) was described in a Life magazine article way back in 1968.

Generational humorist Meagan Johnson delights in pointing out the similarities and differences among the four adult generations. Speaking last month at the annual conference of LeadingAge Ohio, a trade association representing about 400 not-for-profit long-term care and hospice organizations, Meagan focused on differences in the workplace.  But her insights are helpful to all of us.  After all, we all live, work and/or play in an intergenerational world.

While young people regardless of when they are born tend to challenge authority and complain about rules, each generation has distinctive traits because of what Meagan calls “signposts.”

Meagan has put together a helpful “generational decoder” card.

“They have really brought tattoos into the mainstream,” joked Meagan, a Gen-Xer, about the Millennials.

She shared a funny story about taking her grandmother out to dinner. When Meagan arrived, her grandmother hadn’t finished her cocktail. Meagan was anxious to get going and told her to just throw it down the sink.

“That would be wasting.”

Meagan assured her she could get another drink at the restaurant, and Meagan would even pay for it.

“Restaurant drinks are too expensive.”

Another illustration of generational differences is how each one might address a letter, Meagan says, noting examples below:

How Younger Generations Shape Our Country

Young baby boomers were at the forefront of the Vietnam War protests in the 1960s. They led demonstrations across the country as war casualties grew, a draft was instituted and four protestors at Kent State University were killed by National Guard troops.

“In mid-1971, the publication of the first Pentagon Papers – which revealed previously confidential details about the war’s conduct – caused more and more Americans to question the accountability of the U.S. government and military establishments. In response to a strong anti-war mandate, Nixon announced the effective end to U.S. involvement in Southeast Asia in January 1973,” according to the History channel.

In more recent times, the acceptance of gay rights has grown, in part because of young men and women. In an article about shifting public attitudes, the Pew Research Center discussed the impact of younger generations on same-sex marriage.

“Millennials and Gen Xers came into the population more supportive of allowing gays and lesbians to marry legally than older generations, and those greater levels of support have persisted over time. As a result, some of the explanation for an overall shift in attitudes about same-sex marriage is attributable to a ‘generational replacement’ as members of older, less supportive, generations pass away, they are ‘replaced’ in the adult population by members of younger, more supportive, generations entering adulthood.” In 2015, the U.S. Supreme Court’s ruling made same-sex marriage legal across the country.

Which Generation Has the Most Living Members Today?

Would it surprise you to learn that Millennials now outnumber Boomers? True, according to Pew Research, basing their research on current U.S. Census data. And Generation X may pass up Boomers in number by 2028. Looking forward, intergenerational connections will be more important than ever.

Recognizing the benefits of intergenerational relationships, Kendal at Oberlin fosters them between residents and children, teens, and college students.

Kendal at Oberlin was named a “Program of Distinction” by Generations United for its intergenerational programming. Its campus is home to an early learning center.

Residents pass on their wisdom – and frequently befriend Oberlin College students – as part of the college’s Ars Moriendi course. Learn more about our intergenerational programs here.