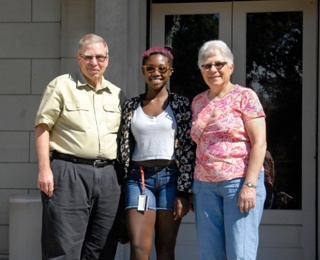 In 2004, the year after Robert Taylor and Ted Nowick moved to Kendal, an Oberlin College professor offered a fall course on death and dying that involved matching first-year students with Kendal community residents. The couple signed up and liked it so much they continue to participate when their schedules permit.

The Art of Dying

“Ars Moriendi: Death and the Art of Dying,” taught by Professor Jed Deppman, is as much about living life to its fullest as it is about dying.

“Some of the residents look at the curriculum; we don’t. We want to focus on the student’s life and our lives and talk about what’s important to us,” Robert says.

Not the older adults.

“It’s not about academics, it’s about relationships,” Michele tells residents. “How have you lived your life and what would you say to someone younger of what not to miss?”

Michele is also in charge of matching residents with students.  “My goal is to put like people together so the relationship has a head start,” she says.

“Are you introverted or extroverted? Allergic to cats? A quilter?” These are just a few of the questions Michele typically throws out to students at the initial meeting.  (Residents do not attend).

Chicago sophomore Thomasina Rogers was matched with Robert and Ted last year. When she saw the “Ars Moriendi” listing, she decided it would be enlightening to tackle such a “taboo” subject as death. She found that sharing weekly meals with Robert and Ted was “real grounding and calming” for her as she settled in at Oberlin. The three of them continue to stay in touch and meet occasionally for dinner.

When Texan Sidney Bernal was a freshman, she was paired with a Quaker couple. She signed up for the course after seeing the Hamlet quote in the course description: “If death is not upon us now, then it will come later, and if not later, then now.”

“That’s an amazing expression,” she says. She has two grandmothers, but because of geographic distance does not have a close relationship with them. “I’ve always wanted that,” she adds.

Students Can’t Expect Active Kendal Residents to Be Sitting Around

Students email or call the resident to arrange a time to meet. (“Don’t just stop over, expecting the resident to be sitting around,” Michele jokes.) The pair is expected to meet at least an hour weekly, but often, the visits last longer.

Ted and Robert like to have their meetings over dinner, usually at a restaurant in Oberlin, and focus on meaningful conversation rather than doing things together.

“We’ve been openly gay since the 1970s, and students are always interested in our relationship,” Robert says. The couple, drawing on their own experiences, encourages students to stay open to all possibilities and not to fear failure.

Other residents like to go bike riding, visit the Allen Memorial Art Museum or attend concerts with their students.

Talking About Things Students Don’t Discuss with Their Parents

At the end of the course, the students and residents gather for a potluck. “Everybody felt they grew as people. We could talk with kids about things they couldn’t or didn’t want to talk about with their parents,” Kendal resident Allen Huszti says.

Bob Longsworth has participated in the program several times with his wife, Carol. “At Kendal, we are always finding ways to keep in touch with the vital, intelligent, lively community of young people. This course provides a catalytic driver for both sides – it’s fertile interaction,” he says.

When Professor Deppman started the course 14 years ago, he paired students with a variety of local organizations working with older adults. Now, though, he works with just Kendal residents. “It grew here,” he says.

“Ars Moriendi” is just one of the programs Kendal residents have initiated or participated in, based on research on the benefits of intergenerational relationships. Discover more about Kendal at Oberlin’s intergenerational outreach by contacting us online or calling 800-548-9469 or 440-775-0094.